Medical drones can deliver items such as drugs, serum and small medical devices quickly and to remote areas. Where retailers are still testing drones for the delivery of large packages to their customers, medical drones are already being used in developing countries. Because medical supplies are often small and light, drones available today have the capabilities required. The time-critical nature of medical supplies is driving the development of a regulatory framework that will allow autonomous medical drones to fly long distances to bring life-saving supplies to patients. 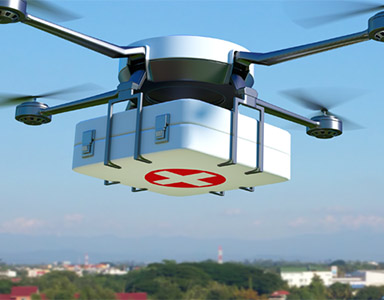 A first step in the use of medical drones is likely to be deliveries between hospitals. The treatment of patients often requires the transfer of test samples or the delivery of medical supplies that may not be in stock everywhere. Such transfers could also take place between small regional hospitals with limited supplies and large health centers. The rapid transfer of samples to labs that are equipped to perform the required tests and the return of corresponding medication could save lives.

Drone transfers between hospitals are comparatively simple because the takeoff and landing sites are known and the route can be programmed. Drones would take off from a hospital roof or parking lot and use GPS to fly a pre-determined route. The landing site can be equipped to make sure the drone can come in safely and accurately. Time saved in a trip across a city with heavy traffic or from downtown to a remote regional health facility can be substantial and the cost would be low.

The next step would be to enable medical drones to fly to a specific but previously unknown location to deliver required supplies. Typical applications could be to aid accident or disaster victims of all kinds. Technicians at the take-off site would enter GPS coordinates and the medical drone would find its way to the target site. Initially drones could drop the supplies in padded packages or with small parachutes but, as they become more sophisticated, the drones could identify potential landing sites near the accident and land autonomously. Drone could be one of the most effective logistical tools to distribute blood supply or related products to save lives affected by natural disasters or terrorist attacks.

Such deliveries would be especially useful in remote areas or places where ground access is limited, such as on islands, ships, or disaster sites. While first responders would attempt to make their way to the sites and take over patient care, emergency packages could help keep patients alive in the interval. Time-sensitive conditions such as heart attacks, shock and poisoning often require immediate attention and medical drones could bridge the gap between the medical emergency and when traditional medical help arrives.

The Axiomtek Embedded Board

A single board computer such as the Axiomtek’s Pico-ITX form factor board can take on autonomous drone control with its powerful, highly advanced processors, extended input/output capabilities and its light weight. One of Axiomtek’s PICO embedded boards has already been selected for an autonomous drone application in that inspects wind turbines in the United States. The drones initiate their own procedures to inspect wind turbine blades using both audio and visual criteria as a part of their inspection processes, taking about 15 minutes to inspect the blades of a turbine, gathering data required for reporting for subsequent maintenance and repair.

The specifications for these drone controls were very similar to what is required for medical drones. Axiomtek’s PICO boards are light. For example, PICO512 weighs about 135 grams (less than 5 ounces), with a thickness of 1.6 mm and can operate in temperatures ranging from -20°C to +70°C (-4°F to +158°F). The board offers scalable 7th Generation Intel® Core™ i3/i5/i7 or Celeron® processors and up to 16 GB RAM. Extensive expansion capabilities and rich input/output interfaces complement the powerful processing capability to meet complex requirements of demanding applications such as autonomous medical drone.